Spencer Pratt And Jay Versace Get Naked To Get Healed 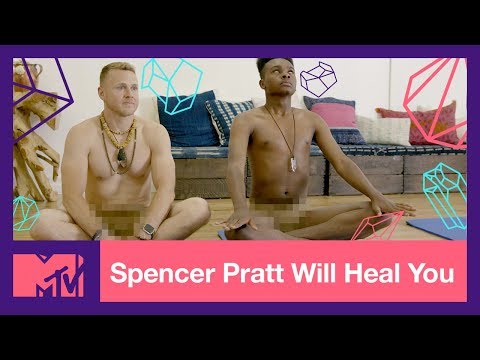 Once the reigning bad boy of reality TV, Spencer Pratt is now a beacon of kindness and the social media king of spirituality and healing. So far, the bulk of his "cleansing" has been through crystals and hanging with hummingbirds in his backyard.

In the new series Spencer Pratt Will Heal You, Spencer is ready to spread his wings. Of course, he won't be taking flight alone — he'll be bringing celebrities, musicians, friends, and family along for the ride and, hopefully, heal them (at least a little).

In the first episode, Spencer brings Jay Versace to a (naked) yoga class in an attempt to alleviate his anxiety. Watch below to see how it all goes down and if being free from clothes also frees Jay from anxiety.

For more of what to expect from Spencer and his healing powers, check out the trailer for Spencer Pratt Will Heal You:

Keep your eyes peeled for new episodes of Spencer Pratt Will Heal you every Thursday!