4 years ago Lily Garner
Jason Momoa and Emilia Clarke Have Epic and Wild 'Game Of Thrones' Reunion Jason Momoa and Emilia Clarke are back together again — and we are here for it! The "Game of Thrones" stars reunited in Ireland earlier this week and it looks like the reunion is everything you'd imagine between Khal Drogo with his wife Daenerys Targaryen. Jason posted a video of sweet snapshots with his off-screen bestie on Instagram and captioned it, "Moon of my life @emilia_clarke every time I leave you my face hurts from smiling to much. I Fucking love you forever. Aloha j." Seriously — these sweet nothings are too much for a "GOT" lover to handle. Emilia also shared an epic snap from their reunion where she is laying straight back and Jason is holding her up using his serious muscles. She joked that their alcohol consumption may have had a little do with their acrobatic skills in the picture. She captioned her pic, "FYI...This is the closest you’ll ever get to me attempting ‘that lift’ fr.. 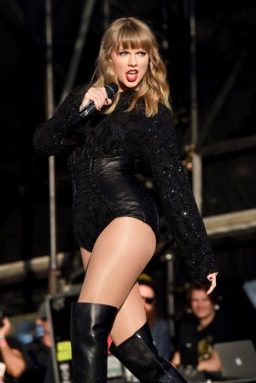 4 years ago Scarlett Newton
Taylor Swift Reportedly Fires Her Backup Dancer and Friend Toshi Over Rape 'Jokes' On Social Media Taylor Swift reportedly went her separate ways with her backup dancer and friend Toshi after she discovered he made several sexist and inappropriate remarks on his social media accounts. Before turning his Instagram account to private, Toshi made jokes about women belonging "in the kitchen" and made "jokes" about sexual assault. PopCrave shared several screenshots of posts he made on social media, some of which are extremely disturbing. In one "joke" he claimed that every girl's weakness is a van, chloroform, a blanket and the woods woods, suggesting a very dark scenario. In another, he "kidded" about sexual assault using an image from a cartoon. Fans were completely taken aback by the images and pleaded with Taylor and Big Machine Record label head Scott Borchetta to let Toshi go. Taylor reportedly did fire Toshi over the images and offensive messages he was sharing. .. 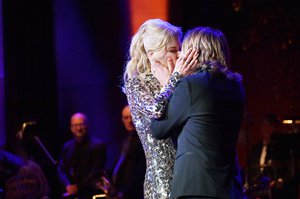 4 years ago Talia Irvine
Nicole Kidman and Keith Urban Share A Huge Kiss On Date Night To Lincoln Center The fire of love is still burning hot for Nicole Kidman and husband Keith Urban! The happy couple stepped out to attend Lincoln Center's American Songbook Gala at Alice Tully Hall on Tuesday in New York City, and packed on the PDA during the evening. Nicole first shared this sweet snap of her and her hubby of nearly 12 years smiling as they headed out to the event. She captioned the picture, "Date night ❤️on our way to the #AmericanSongbookGala honoring my dear friend Richard Plepler." Nicole looked absolutely stunning in a gold, sparkling dress with her hair pulled half up-half down. Keith looked dapper in a suit. And apparently, Nicole thought he looked pretty hot too — because she couldn't keep her hands off of him! "The Big Little Lies" star planted a big smooch on her man when she took the stage after his performance. These two are no strangers to a little PDA. They famously locked lips at.. 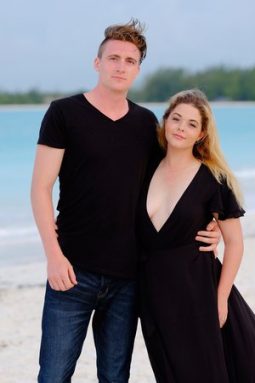 4 years ago Lily Garner
'Pretty Little Liars' Star Sasha Pieterse Reveals First Look At Her Fairy Tale Wedding: See Her Bridal Dress! "Pretty Little Liars" star Sasha Pieterse had a fairy tale wedding day over the weekend! The 22-year-old actress married her longtime boyfriend Hudson Sheaffer at the Leslie Estate, a castle in Glaslough, Ireland, according to People. Sasha shared the first look at her dream wedding day in a stunning video posted on her Instagram on Tuesday. She captioned the video, "A few days ago I married the man of my dreams at a Castile in a faraway land in front of my closest friends and family...swoon ✨ I apologize in advance for the amount of wedding and honeymoon documentation to follow. @hudsonsheaffer." Sasha definitely has good reason to share tons of pics — because she made a gorgeous bride! She donned a custom Christian Siriano off-the-shoulder wedding dress with a silk satin bodice and a skirt full of ruffles. The ballgown was breathtaking. She wore her hair down in .. 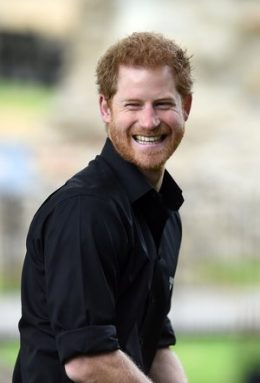 4 years ago Lily Garner
Prince Harry Is Bringing The Invictus Games To The Hague In 2020 Prince Harry already has another major milestone to look forward to! The 33-year-old royal just announced that the Invictus Games will take place in The Hague, in the Netherlands in 2020. The next Invictus Games are set to take place this year in or Sydney, Australia. Harry and his new bride, Meghan Markle, will be heading to Australia in October to be apart of the games and are expected to also spend some time in the country after. Harry and Meghan famously made their "official debut" as a couple at the Invictus Games last year in Toronto. At the time, Harry showed off his new love as they walked hand-in-hand throughout the games and were also seen kissing in their VIP booth at the closing ceremony. Kensington Palace also announced the exciting news about the Invictus Games in 2020 on their Twitter account. They captioned a special video of the competition, "'If you have the will, anything is possible.' Witn.. 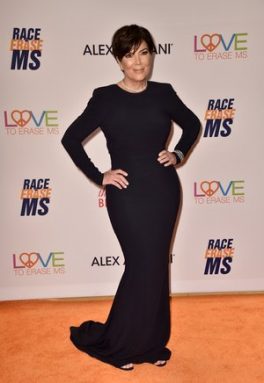 4 years ago Lily Garner
Chrissy Teigen Sends Kris Jenner A Massive Champagne Vending Machine Chrissy Teigen knows how to get Kris Jenner a little buzzed! Kris revealed on her Instagram that her pal Chrissy delivered a massive Moet champagne vending machine right to her front door. "Umm thank you @chrissyteigen @johnlegend @jenatkinhair @mrmikerosenthal ...When a forklift shows up at my house on Monday morning with a Champagne Vending Machine and an unlimited supply of @moetusa @moetchandon Champagne i am jumping for joy!!! And I’m not gonna lie a little drunk. I LOVE you guys thank you my beautiful friends #ilovechampagne #ilovemyfriends #blessed #luckygirl," Kris captioned a picture of the big vending machine. Kris was definitely a fan of the bubbly gift. She even took an Instagram video documenting the pleasant surprise. The reality star matriarch could probably use a little bubbly after her long weekend celebrating her grandkids Penelope and North's birthdays. 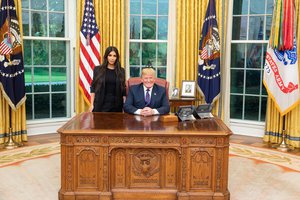 4 years ago Fiona Watkins
Kim Kardashian West Meets With President Trump To Discuss Freeing Alice Marie Johnson President Donald Trump has met with reality TV star Kim Kardashian West as she visited the White House to advocate on behalf of a woman serving a life sentence for drug offenses. Trump is confirming the meeting — as he often does — via Twitter, writing, "Great meeting with @KimKardashian today, talked about prison reform and sentencing." He included a picture of the two in the Oval Office. Kardashian West has been urging Trump to pardon Alice Marie Johnson, 63, who has spent more than two decades behind bars and is not eligible for parole. Kardashian West had also been expected to meet with Trump's son-in-law and senior adviser, Jared Kushner, who is overseeing the administration's push to overhaul the nation's prison system. 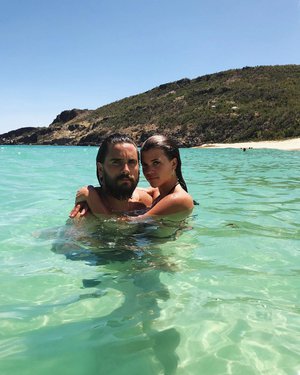 4 years ago Fiona Watkins
Sofia Richie & Scott Disick Break Up Days After Family Vacation (Report) It's over for Scott Disick and Sofia Richie. The reality star and Lionel Richie's 19-year-old daughter have reportedly called it quits nearly nine months after confirming their romance. Despite the pair celebrating Scott's 35th birthday with his three children in St. Barts just days ago, a source told People that Sofia ended their relationship over Scott's "old issues." WATCH: Scott Disick & Sofia Richie Make Their First Official Appearance As A Couple Scott was reportedly spotted getting cozy with another woman during Kanye West's album listening party in Wyoming last week while Sofia stayed home on the West Coast. According to Us Weekly, the model had already found out that Scott previously cheated on her in Miami. Once she caught wind of his reported behavior in Wyoming, however, that was "the icing on the cake" to call things off for good. The couple first sparked dating rumors last.. 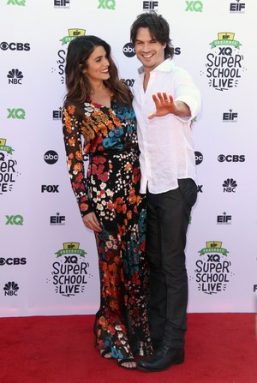 4 years ago Fiona Watkins
Ian Somerhalder & Nikki Reed Show Off Kissing Skills In Wild Acrobatic Pose! Ian Someherlader and Nikki Reed are already #couplegoals, but these two just took it one step further with an incredible kissing pic. Ian posted a photo over the weekend where he and his wife of three years are sharing a smooch, while she's laying upside down on top of his feet and leaning back in a backbend. The pair were practicing acro-yoga in the desert, but clearly they know a thing or two about bringing romance to the next level too. Ian captioned the snap, "Acrokisses in the desert with this human…." Nikki showed off their serious skills on her Instagram too. We're officially impressed!
« Previous PageNext Page »
Share Links
Trending Posts