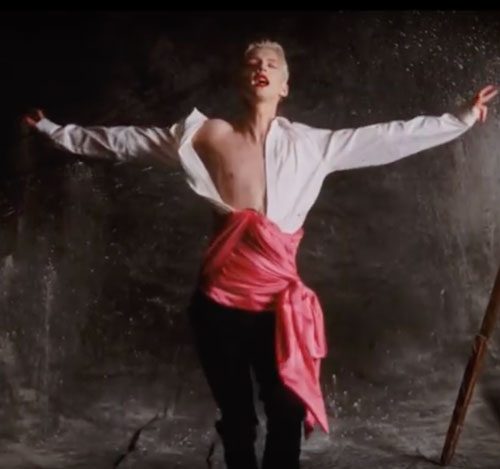 Troye Sivan put out the video for his power bottom anthem Bloom, and it’s basically just him looking like a baby Annie Lennox shooting a community college film student’s project in an Olan Mills studio in 1989. There’s zero sight of not-so-subtle images like a brown rosebud slowly opening up as the dick part of a flamingo flower fucks it. Nothing like that. I feel as ripped off and cheated as a power bottom when a Grindr top promises he’s working with a mighty Redwood trunk and he’s really working with a wilted dandelion stem – Towleroad

Sandra Bullock brought her main boo to the premiere of Ocean’s 8, and you may think that would make her happy, but in every picture of her on the carpet, she looks like she’d rather be sniffing the wet spot on the skank couch that Jesse James fucked all his side pieces on – Lainey Gossip

Meghan King Edmonds welcomed her second and third children, while her husband welcomed his… I lost count. And so did he, I’m sure – Reality Tea

Kenneth “You So” Cole reached into the depths of his heart to write a very touching tweet about the death of Kate Spade. But seriously, the first pair of Kenneth Cole shoes I bought at an outlet gave me the worst blister I’ve ever gotten, so I’ve never trusted him since – Celebitchy

Why does this remind me of my plastic Tupperware bowls drying on the rack after I just washed them? – Drunken Stepfather

Before his death, David Cassidy admitted that he was still drinking – SOW

Woe is Emily RideAJetSki, getting shown up by a pair of sheep dog boots – Hollywood Tuna

“I’ve been waiting forever for this moment,” said absolutely no one after the trailer for that movie starring Amber Heard and Johnny Depp came out – Pajiba

Melania Trump finally came out of hiding, but why do I have a feeling that’s really a Westworld robot that’s been programmed to not barf on the inside every time her husband tries to touch her? – Just Jared