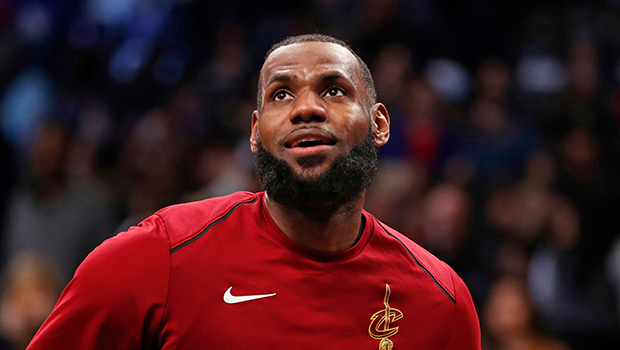 Though he and the Cavs lost the first two games of the NBA Finals, LeBron James refuses to let anyone – not even Steph Curry – stop him from making ‘history.’

After a bad beat in Game 1 and a blowout in Game 2, LeBron James, 33, and the rest of the Cleveland Cavaliers are in a bind. Two more L’s and they’ll lose the NBA Championship to the Golden State Warriors…again. The Cavs meet the Dubs for Game 3 on June 6, and as a NBA insider EXCLUSIVELY tells HollywoodLife.com, King James is struggling to get his head in the game. “LeBron is trying not to be scared of Steph [Curry, 30] and the Warriors, but it’s hard. The Warriors are dominating and as much as LeBron is focusing on his own playing and team, he can’t stop worrying about Golden State’s best player – Steph – who has totally gotten inside LeBron’s head.”

It’s hard to not be afraid of facing Steph Curry, who set a NBA Finals record in Game 2 by making nine 3-pointers to give the Dubs a 122-103 win on June 3, according to ESPN. Despite everyone pretty much expecting the Warriors to cruise to another NBA championship, King James refuses to give up. “LeBron feels like his entire season and huge part of his legacy will be determined by tonight’s game,” the insider tells HollywoodLife.com. “He feels like a win will shift momentum of the finals and help cement his spot as the greatest player of all time. The stakes are high and LeBron wants this win more than any game in his career.”

Of course, it’s not wise to count out LeBron. Remember, this is the man who led the Cavs from a 3-1 deficit in the 2016 NBA Finals over the Warriors to bring Cleveland its first major sports title since 1964. Plus, if it wasn’t for J.R. Smith, 32, foolishly causing Game 1 to go into overtime due to not knowing the score – or because he was “high or drunk,” as some fans angrily accused him of being – the Cavs could have won Game 1.

A game 3 victory – and a championship – is not out of reach when King James, arguably the greatest of all time, is on the court, and he knows it. “LeBron is not going to let Steph, or anyone, get in his way,” the NBA insider tells HollywoodLife.com. “He feels determined to get the big upset win and make history.”