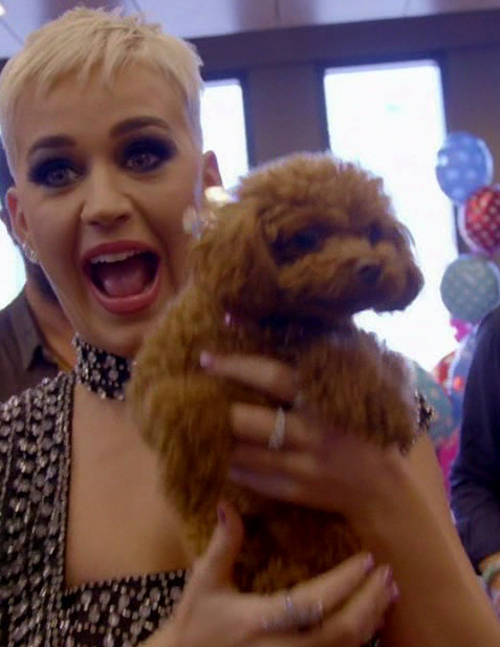 Katy Perry is on tour in Europe and brought her pupper Nugget with her. Nugget is a teenie tiny “micro teacup poodle”. Sadly, these teenie tiny dogs that are so popular with celebrities (I’m looking at you, Wonky) are about as robust as a wet Kleenex. So little Nugget fell off the bed in the hotel and had to be resuscitated with CPR! Thank goodness Katie’s assistant Tamra was on the scene. She saved Nugget’s life with a CPR technique she learned from watching a guy save a squirrel on the ani-pals website The Dodo.

Katy posted an Instagram story partially reenacting the harrowing saga of Nugget and The Hotel Bed.

Katy Perry tells fans about how her dog Nugget was 'brought back to life' by CPR from her assistant Tamra. pic.twitter.com/uDD60pM7JV

The tiny dog, who is often confused for Perry’s boyfriend Orlando Bloom’s similar looking pet, blacked out for three minutes, according to Perry, before she came to again.

PHOTO | Nugget on @katyperry's Instagram story
A couple days ago Nugget fell out of the bed and blacked out for three minutes, Katy's assistant Tamra gave her CPR and thankfully she's alive and well

Captioning the X-Ray “the Dr. said they had never seen a liver that small” is a really perverted humble brag, if you ask me. Dogs aren’t supposed to be that small. Call me crazy but I prefer my pets to have organs that can be found without the use of a proton microscope.

when nugget was the size of a beanie baby

I get that they’re real cute and the poops are probably tiny too making for easy clean up, but given the rate at which I lose my remote control in the couch cousins in my house, little Nugget would be living off of chip crumbs and farts for a good percentage of his life if he lived with me.