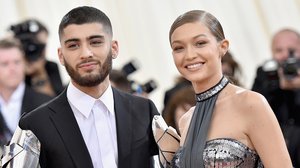 Gigi Hadid and Zayn Malik seem to officially be back together again!

After the "Ocean's 8" premiere on Tuesday where Gigi walked the red carpet with her pal Lily Aldridge, Gigi posted a video on her Instagram Story where she's cuddling with her ex Zayn.

While Zayn's face isn't visible, his bleach blond 'do and his tattoos are easily seen in the photo. He appears to be nuzzling up to the Victoria Secret model stunner's neck as she demurely smiles for the camera. Gigi added Pokemom emojis and a heart emoji on the snap and captioned it, "After party like making it rain with Pokémon cards."

It looks like these two are officially an item again!

Rumors that the pair had rekindled their romance started swirling in April after they were seen kissing. They had previously announced their breakup in March.