Ariana Grande And Pete Davidson Joked About Having Kids 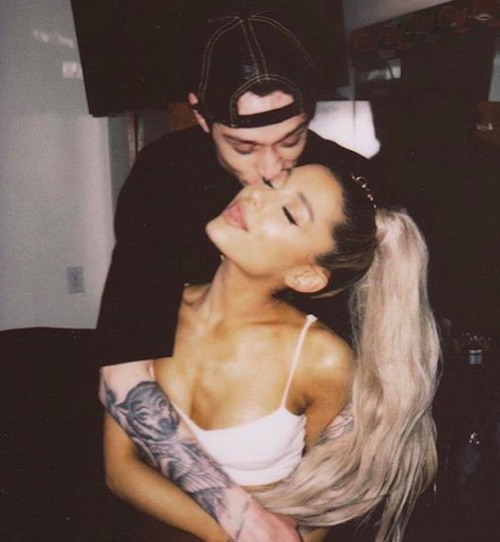 Ariana Grande and Pete Davidson have been moving fast. On May 10th, we learned that Ariana and Mac Miller were over. A week later we learned that she and Saturday Night Live’s most awkward cast member were a thing. Less than a month in, and Pete’s already got multiple tattoo tributes to Ariana, and she maybe got one in honor of Pete. I was expecting the next move to be an Us Weekly cover featuring a composite of Ariana and Pete in wedding gear with the headline “Pete-ing Her At The Altar?” Instead, they’re rocketing past marriage rumors and going straight for baby talk.

On Tuesday night, Pete posted a picture to Instagram of himself and actor Brian Tyree Henry with the caption, “I’m having his kids.”

i’m having his kids

According to E! News, Ariana was quick to pop in and comment, “I look so good here.” To which Pete responded by typing five drooling face emojis, which as we all know is millennial shorthand for, “I am stunned, astounded, and positively dumbfounded by your timeless beauty, my precious turtle dove.”

Ariana and Pete were obviously just joking, but who knows? If they’re committed enough for tattoos, maybe they’re committed enough to make a baby that would inevitably fall into the uncanny valley by looking exactly like both of them. And really, they’re old enough; Ariana turns 25 in a couple of weeks, Pete is 24. The only person who might be weirded out by it all would be the obstetrician assigned to Ariana Grande’s pregnancy. “I’ve heard of Tyco’s Mommy’s Having a Baby doll, but I’ve never seen one in person.”